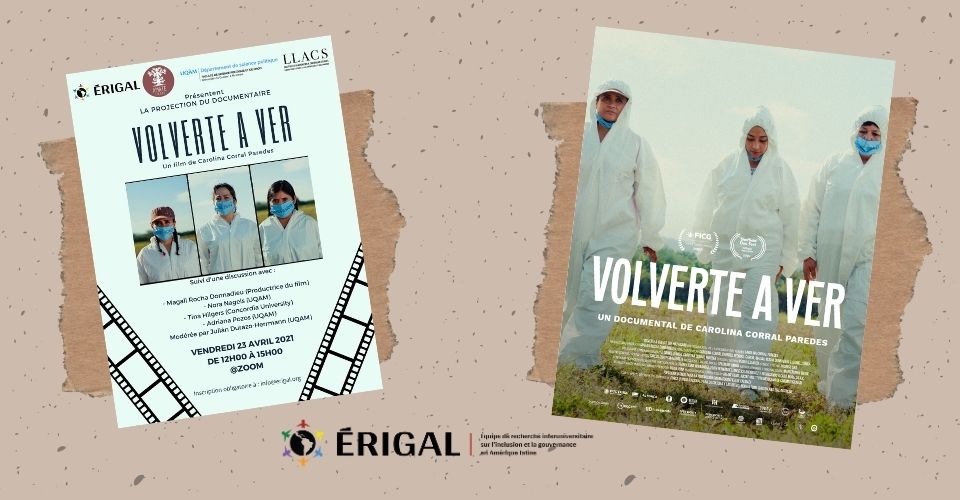 ERIGAL had the pleasure of participating in the organization of the screening of the Mexican documentary "Volverte a ver" (To see you again), last Friday, April 23, for the first time with French subtitles.

The documentary shows Lina, Angy and Edith searching for their disappeared daughters and relatives in Morelos, Mexico. At this occasion, they discovered that the District Attorney secretly buried more than 200 bodies who were murdered during a failed war against crime, which actually targets civilians. The film follows their training in forensic tasks and their participation at the exhumation of the bodies, for the disappeared to return home. Their findings reveal a breathtaking reality: the Mexican authorities are involved in disappearances by secretly burying people in hidden common graves.

The screening was followed by a discussion on zoom, moderated by Julián Durazo Herrmann. The discussion took place with the participation of Carolina Paredes (film director) and Magali Rocha (film producer) who allowed us to deepen our understanding of the shooting circumstances and political context. Several members of ERIGAL were also invited to share their thoughts on the film. Adriana Pozos (UQAM) gave us a better understanding of the Mexican situation of enforced disappearances and the multiples questions that surround this matter. Nora Nagels, professor at UQAM, spoke about the personal but also political dimension of the emotion felt when watching the film, and showed how the subject it deals with is at the intersection of multiple issues of gender, power and forms of participation. Finally, Concordia’s professor Tina Hilgers offered a perspective related to issues of violence in Latin America.

The discussion was fascinating and the audience very engaged. Many thanks to Julián Durazo-Herrmann for this initiative, to the speakers for their presentations and their very relevant contributions, and of course to the audience for its great interest and participation. We hope to be able to offer you such events again in the near future.