On October 26th, several members of ERIGAL participated in a panel organized by Charmain Levy (professor at UQO and member of ERIGAL), during the Symposium of the UNESCO International Chair in Democracy, Global Citizenship and Transformative Education, in Valparaiso, Chile.

The panel was about urban citizenship and the urban commons, where urban citizenship is considered as membership and belonging to an urban community where one’s rights and access to the resources necessary to pursue urban living are guaranteed. It is shaped by the embodied intersections of socio-spatial differences involving gender, class, ethnicity and migrant status and materialities infrastructure. Citizenship refers to the city as its public sphere and to rights-claims addressing urban practices as well as claims concerning residence, neighborhood life, infrastructure, transportation, and collective consumption. Citizenship is not only a finality but a process of inclusion at the local level and an expression of social and political participation involving the formulation of new claims as well as the defence of existing rights. The urban commons is not just a critique or contestation of forms of enclosure emerging through the increasing exploitation of cities that subjects them to a logic of exploitation without consideration of the quality of life of its inhabitants. Urban commons projects essentially act as a counterclaim to the privileging of exchange value over use value— or of profit over people—that has characterised dominant urban development practices in recent decades. They represent a paradigm shift in urban governance and citizenship. This concept is based on the idea that public spaces, urban land, and infrastructure should be accessible and able to be used by, urban communities to produce and support a variety of goods and services central to the sustainability of those populations. The key principles of this concept include sharing, collaboration, civic engagement, inclusion, equity, and social justice.

The panel was composed by Françoise Montambeault, professor of Political Science at UdeM and director of ERIGAL, and Martine El-Ouardi, former master's student at ÉRIGAL and current doctoral student at the University of Lausanne. The latter presented a joint work entitled "Governments come and go but citizens stay": Gardening public space as an act of radical democracy in Mexico City. In addition, Dan Furukawa-Marques, professor at Laval University and member of ÉRIGAL, and Alice Bezerra de Mello Moura, doctoral candidate in social sciences at the Université du Québec en Outaouais, made a presentation.

Congratulations to them for their great work! 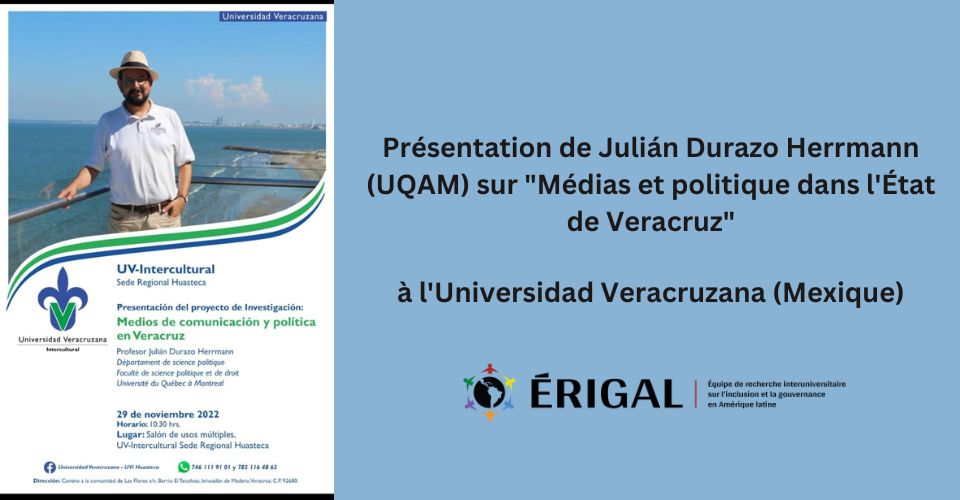