It is with great joy that we announce today the launch of our second video capsule of our ÉRIGAL Series "Diálogos. Dialogue" which consists of a series of short video interviews with local actors, practitioners and academics from Latin America.
This vignette was made possible thanks to the work of Audrey-Anne Doyle (master's student at Concordia University); professors Jean-François Mayer and Tina Hilgers; Annabelle Dias-Félix and Garance Robert as coordinators and Rose Chabot as editor.

Entitled "Invisible work : UTRASD's Struggles for Domestic Workers' Dignity in Colombia", it gives voice to Claribed Palacios García, president of USTRAD (Union of Afro-Colombian Domestic Service Workers), who explains the work of the union and the challenges it faces. The video is available with English or French subtitles here or directly on ERIGAL's YouTube channel : https://www.youtube.com/watch?v=ccgOtsmPdNs.

What are the effects of recent socio-political changes in Latin America on the governance of development and on policies of inclusion, the social mobilizations that structure them, and more broadly on state-society relations? How do informal channels of governance operate in Latin America, and what are their effects on the state, society, and their relations? Is informality synonymous with the reproduction of inequalities in power relations and social exclusion, or can it become a space for political participation and power sharing? When political and social tensions reach a breaking point, how are conflicts governed? What is the influence of recent socio-economic and political transformations on the governance of public security and its practices?

These are the questions that drive ÉRIGAL and are the source of the Diálogos - Dialogues project. This series of interviews allows to build common reflections from the experiences of actors but also from the knowledge of the Latin American continent.

Enjoy your viewing and do not hesitate to share ! 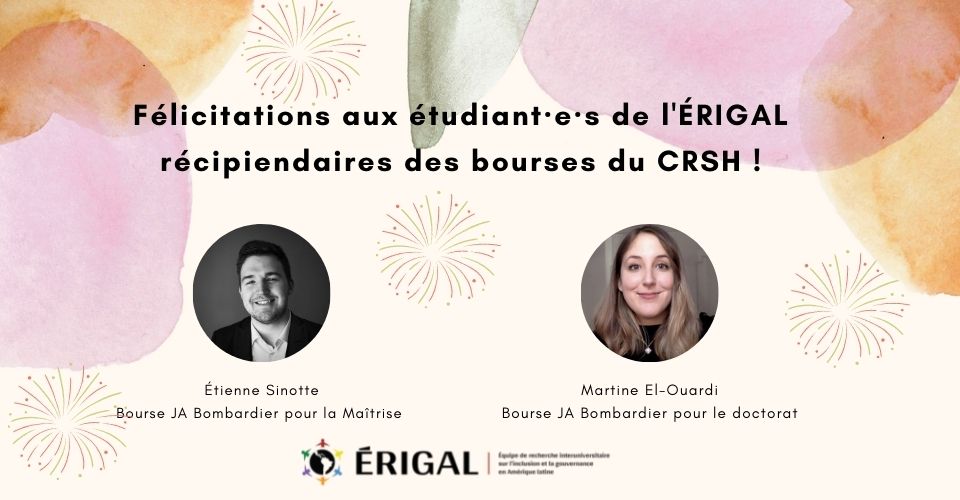